The sexual abuse of a child is devastating for both the victim and his or her family. Counseling can help—the sooner the better. When the Fry Foundation discovered that abused children in Chicago face long waiting lists for mental health services, it helped a coalition of mental health providers coordinate efforts to improve systems to get victims the help they need as quickly as possible. 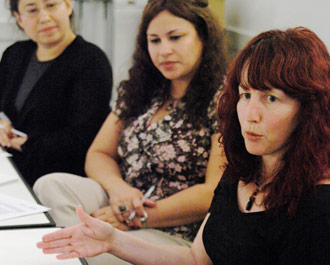 The building on South Damen Avenue is not at all intimidating—charming, even: low rise, gentle colors, a layout that invites exploration. It hides a brutal reality. This is where Chicago children reported as victims of sexual abuse are brought for help—nearly 2,000 of them each year, or almost five a day. Over half of the children referred here are aged 10 or under; unthinkable as it sounds, a quarter are under the age of six. Most are girls.

The Chicago Children's Advocacy Center (CCAC) brings together resources for responding to the children's tragedies; it handles all child sex abuse cases in the city each year. Detectives from the Chicago Police Department are here, along with prosecutors; so are pediatricians, representatives from the Department of Children and Family Services, and Advocacy Center counselors trained in dealing with abuse. Having all the resources under one roof makes it possible to respond quickly to children in trouble, explains CCAC Executive Director Charlene Rivette, and in a way that minimizes the pain of an already extremely stressful situation.

But in recent years, getting children and families into counseling quickly to help them come to terms with the abuse has become more and more challenging. All the agencies providing mental health services (including CCAC itself) have long waiting lists—six to nine months on average. With state funding for human services in disarray, that problem isn't going away anytime soon. There was also no way for CCAC, which handles referrals, to tell which agencies might be able to take a child more quickly than others, which agencies were working with which families, or whether a given family was on the waiting list of more than one agency.

Getting help quickly is imperative for abuse cases, says Rivette. "Counseling can help children see that this can be coped with, that the tragedy is part of their life, but not their entire life." Providing support while the crisis is fresh is important, she adds: otherwise, kids paper over the trouble, families get more resistant (or just disappear), and problems fester—only to show up later on in the young person's life.

So, with encouragement from the Fry Foundation, the agencies in the Network of Treatment Providers for Child Sexual Abuse are devising a way to improve services. First, they are setting up a triage system to identify the most pressing cases and get them counseling right away. Second, all the referrals and waiting lists are being consolidated into one computerized system that can identify agencies where help can be offered quickly, track where families are referred, and avoid duplication (having children on more than one waiting list, providers realized, had unintentionally exaggerated the scale of the backlog).

For those still on waiting lists for individual counseling, Children's Memorial Hospital is working with YWCA-Rise Counseling and Catholic Charities to organize group sessions where victims and families can get help in the meantime. Based on a new therapeutic curriculum developed by CCAC, the group sessions for parents teach what to look for in their children (nightmares, bedwetting, aggressiveness) and how to help. For the children, the group sessions teach coping skills and ways to manage difficult feelings. Says Rivette, "We don't minimize their problems, but we teach them to get through the sense of anxiety, and get through the day." More group sessions are planned for the second year of the project to help meet the need while families wait for individual help.

The Juvenile Protective Association will be evaluating the results, exploring such factors as whether a time lag in getting help discourages families from engaging in therapy, how many families referred to group sessions take advantage of the opportunity, how many go on to individualized treatment, and if there are any differences among families in what services they utilize. For some families the immediate group counseling is all they need, but many others benefit from individualized counseling.

Some families find it hard to turn to outsiders for help, especially for dealing with an intrafamily problem (over 80 percent of abusers are relatives or other people known to the child). The group sessions can give such families permission to seek further individual counseling, Rivette says, by showing them how critical it is to confront the problem—and protect the innocent victim from further trauma.