Lloyd A. ("Cap") Fry, Jr. (1917-2001), the son of our founder and the father of our current Board Chair, served ably as the President and a Director of this Foundation for more than a decade. More to the point, he served as President of the Lloyd A. Fry Roofing Co. from 1955 to 1977 and in that capacity he was substantially responsible for the economic success that is today reflected in the endowment of the Foundation. We owe our success to the success of the Fry Roofing Co., which became a large national company selling a simple commodity product: roofing shingles made of asphalt, felt and granules. Below, Mr. Fry recounts the remarkable beginning and rapid growth of the company. 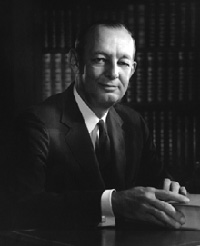 I have been asked by the Board of Directors of the Foundation to express my recollection of the stages of development and the management philosophy of the Lloyd A. Fry Roofing Co.

The company was founded by Lloyd A. Fry, Sr. in 1933. This was made possible by several events occurring over a short space of time.

The first event was a "loan" being made to Fry, Sr. by The Continental Illinois National Bank & Trust Co. in the amount of $50,000. The loan officer was John Geddes. The loan was made solely on Fry, Sr.'s past reputation in the industry and without any collateral required. Federal Bank examiners made Continental "charge off" the loan before the first installment was due.

Shortly thereafter, Robert Munger, who owned a felt mill in Miamisburg, Ohio, decided to join Fry, Sr. in this new venture, and he took Fry stock for his mill, and became Vice-President of the Company. He later sold his stock back to the company and retired. Robert Trumbull and J. Aikens Miller, the owners of Trumbull Asphalt Co. of Illinois, advised Fry, Sr. that their company would supply the new venture its asphalt requirements on a liberal line of credit. Fry, Sr. and Miller later bought out Robert Trumbull, who retired, and Trumbull was reorganized as a subsidiary of Fry Roofing. Miller took Fry stock for his holdings. Forrest Lowrie, who owned a slate mine and granule plant in Poultney, Vermont, agreed to supply the new venture its granule requirements. By 1960, Fry's volume was so large that Central Commercial could no longer supply the requirements, and Minnesota Mining and Manufacturing Co., with multiple plant facilities, became the Fry supplier of roofing granules.

The last of these important early events, and probably the most valuable one, involved an agreement between Fry, Sr. and General Robert E. Wood, Chairman of Sears Roebuck & Co. In 1933, Sears agreed to buy its roofing requirements in the Chicago area from Fry on a "cost plus" contract basis. This arrangement gave Fry the financial status to move forward.

The first plant was constructed in Clearing, Illinois near Midway Airport, in a rental building, with very limited facilities, including office space. The company employed less than 50 people and the current labor rate was $.25 per hour.

With orders from Sears and from additional wholesale distributors, production increased, and Fry began to make money and started paying off its debts. Sears products were labeled "Homart", and wholesale distributors bought under the "Fry" label. Without a doubt, had it not been for the Sears purchases, there would not have been a Fry Roofing Co.

During my high school years, I worked as a "helper" in the plant for $.25 per hour in 1933, and for up to $.75 per hour when I went west to college. During my college years, I worked in the accounting department during summer vacation for $50 per month. Upon graduation from the University of Southern California, I was paid $75 per month as the assistant office manager at the Clearing Plant.
While I was in college for four years, the company had grown from one plant to seven plants located from New Jersey to California. This growth was financed from earnings, and Sears continued to give the company the orders to get each new plant started. The company was becoming well known in the industry for being very competitive and for making an outstanding product. New wholesale distributors were added as each new plant went into production.

I was the first manager of a new plant constructed in 1940-41 in North Kansas City, Missouri. I had been successful in adding new accounts and all was progressing on schedule. My new position came to a sudden halt when the Japanese bombed Pearl Harbor on December 7, 1941. I was a 2nd Lieutenant in the Reserve, and was called to active duty in January, 1942.

During World War II, the company, with seven plants, operated around the clock, six days per week, supplying roofing materials for government installations under construction throughout the United States. All commercial customers were on "allocation", while military requirements took precedence.

When I was discharged from the service on December 15, 1945, Fry, Sr. gave me a new job as Vice-President in charge of development. He had selected five cities, and instructed me to acquire the properties and build five new plants as soon as possible. The company had prospered during the war years and financing these projects was not a problem.

The assignment was one of overwhelming proportions; but I was lucky to have the help of real professional individuals and companies that made the assignment possible. Ralph Laudermilch of Campbell, Lowrie, Laudermilch Corp., Chicago, was the general contracting firm; along with Olsen and Urbain, Architects and Engineers, and Roofing Machinery Manufacturing Co. of Chicago. These organizations and many individual employees and suppliers, working together, made the entire project possible.

The five new plants were on line, and within budget, in less than one year. Demand for roofing products was in excess of supply during the war years, and it was easy to sell the output of each plant. Sears continued to be the largest single customer; but we served an additional four hundred accounts throughout the U.S. Sears contributed about 10% of our sales.

I was made President of the company in 1955, and we continued to expand facilities until we were considered the world's largest manufacturer of roofing and allied products. Fry, Sr. was known as "the Chief", and he had the respect and admiration of all employees, regardless of their status in the company. The Chief was good about giving new "titles" but slow to increase the salary of employees. He believed that the salary should be enough to compensate for the duties and responsibilities of the position, and that the award for performance was a "Christmas Bonus." He had his own formula for this bonus, which he never revealed. We looked forward each year, with much anxiety, for "the bonus" that was part of the holiday festivities. The program obviously worked, as all prospered.

The company enjoyed a very unusual relationship with its employees. Each plant employed about 200, including management and truck drivers. We operated about 200 over-the-road rigs, delivering our products and backhauling raw materials. Because each plant was relatively small, employees knew each other by first names. Even executives from the General Office in Summit, Illinois knew all of the key employees by their first names. The company was free of any labor problems, and that contributed greatly to the overall success of the company.

In 1976, the company had twenty-four plants producing asphalt roofing products, and eighteen asphalt plants that produced asphalt for the roofing plants; but it also produced road asphalt, and specialty asphalt for burial vaults, and automotive storage batteries, as well as asphalt cements used for industrial roofs.
"The Chief" and I talked about the future of the company, and we decided that if we could find a buyer willing to pay all cash, and said buyer would be compatible with our customers, and more importantly, would integrate our employees into their operations in a satisfactory manner, then we would sell the assets of the company.

There were several corporations that were interested; but only one that met all of the requirements, and that was Owens Corning Fiberglass Corp. of Toledo, Ohio. William Boeschenstein, Chairman of OCF, assured us that our employees would be given tenure with his company. OCF was currently selling fiberglass insulation to almost all of our customers, including Sears. The sale was finalized on April 1, 1977, and Fry became history. I think OCF is happy, as they have increased production capacity, and dominate the asphalt shingle industry.

The proceeds from this sale to OCF, in large part, served as the endowment of the Lloyd A. Fry Foundation.

I feel blessed that I was a part of the growth of the Company, and that I had the opportunity to serve on the Board of the Foundation from 1984 until retirement in 1994. The Fry Foundation is in capable hands, and I am sure it will fulfill the purposes for which it was intended for many years to come.
Respectfully submitted,