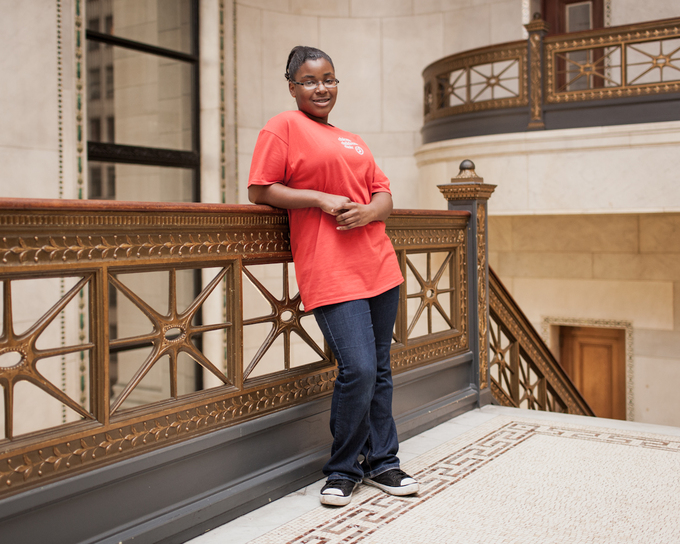 When it comes to arts education, not all Chicago schools—or neighborhoods—are created equal. Widely considered one of the city’s premier arts organizations, the Chicago Children’s Choir continues to expand opportunities for a range of children to participate in high-quality arts education.

When someone from the Chicago Children’s Choir told Sharae Corbin about the group they were starting in her neighborhood, she listened.

Corbin, 13, hadn’t found anything like it in Humboldt Park, a historically Puerto Rican enclave that has since attracted a wide mix of families. She admits that she has struggled sometimes to feel like she fits in; though she is African American, other kids would tease her for “sounding white” because of the way she spoke.

But at the neighborhood choir, she felt like she belonged. “You don’t know anybody at the beginning,” she remembered. “You’re nervous. But when you walk in, it’s like you’ve known them a really long time.”

Leaders of the Chicago Children’s Choir saw that their school-based choirs alone wouldn’t reflect Chicago’s rich diversity. The organization strives to expose children to other cultures while validating their own, according to Judy Hanson, director of choral programs.

The organization decided to try creating Neighborhood Choirs across the city, which pooled students from several schools. Now serving roughly 500 students, the eight choirs have proven so successful that a new choir will be added this year. They provide an ever-expanding pipeline of diverse singers to audition for the Concert Choir, the organization’s highest level. Support from the Fry Foundation helped create a route for children like Corbin to realize that goal.

This year, as a member of the Concert Choir, she will have opportunities to travel internationally and perform before large audiences at Millennium Park and other venues. She said it is the “excellence” that attracted her.

“They’re just really into the music. They look so professional,” she said. “It makes you think, I wanna be just like them.”

But she was reluctant to audition for the Concert Choir, and thanked her mentor, Humboldt Park Neighborhood Choir Director Danny Wallenberg, for encouraging her to push herself. The choirs, he said, can build confidence.

“They feel like a group, an ensemble,” he said. “They feel like, ‘I’m good, because I’m part of this.’” Corbin said the Neighborhood Choir also taught her the benefits of hard work. “Some of the songs, they’re hard to learn,” she said. “But it makes me think, if I can learn Spanish for a song, I can do my Spanish homework.”

Founded in 1956, the Chicago Children’s Choir aims to end hatred and misunderstanding by bringing groups of children together through music. It embodies the Fry Foundation’s arts education grantmaking strategies by providing both learning and life-enriching experiences for low-income youth, while being artistically rigorous. 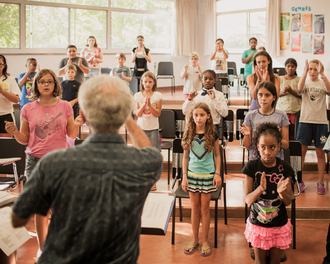 These children experience a significant “equity gap” compared to their higher income peers, according to an April 2012 U.S. Department of Education study. Most higher-income schools offer a range of music classes while lower-income schools lack arts education options.

Fry Foundation support of the expansion of the Neighborhood Choirs helps Chicago Children’s Choir ensure that larger numbers of talented students can experience more than the 40 minutes a day of arts education they can receive through an in-school choir, said Judy Hanson, director of choral programs.

The Foundation supports organizations that take innovative approaches to engaging underserved communities. The Neighborhood Choirs also create an entry point for parents and children who may not have the means or the time to travel downtown or across the city to participate in arts education programs.