The Fry Foundation knows that it takes innovative approaches to help Chicago’s low-income high school students get to college. OneGoal’s ability to work with high schools has proven so successful, other cities hope to replicate it.

Like many of Chicago’s public school students, Loreal Latimer had a lot of responsibilities. Her parents battled drug addictions and struggled to hold jobs, so she got her own. And, as one of ten children, she had to take care of the little ones. No one could help her think much beyond high school.

“I knew I wanted to go to college, but I didn’t know how to get there,” said Latimer, a 2009 graduate of George Henry Corliss High School in the far South Side Pullman neighborhood.

Things changed her junior year, when she joined the OneGoal program at her school. With help from the Fry Foundation, OneGoal stands apart from other college preparedness programs by rooting itself inside a school. It selects a teacher to lead a daily class, within regular school hours, to help students focus on getting into the right colleges and staying there.

That includes helping them raise their GPAs and ACT scores, fill out applications, and choose the best school. The program lasts for three years, through their freshman year of college.

OneGoal deliberately recruits mid- and under-performing students in low-income schools. Latimer and students like her have assets that their higher-income peers may not, said Executive Director Jeff Nelson, and OneGoal teaches them how to leverage those assets to their own benefit.

Latimer, for instance, learned how to prioritize her own goals. Though she had to keep her job at a local charity, she spent a little less time volunteering at church. Latimer, now 21, became a Gates Millennium Scholar and earned a full tuition scholarship for the University of Illinois, where she is a senior.

She says she couldn’t have done it without the nine other students in her school’s OneGoal program. “It was a little bit easier, just knowing there were other people going through the same kinds of things,” she said. “I got tunnel vision. I just wanted to go to college.”

Soon after arriving at U of I, she found a couple of mentors in high-ranking positions at the university. She credits the confidence she built during OneGoal, and still leads groups for OneGoal graduates at her school. 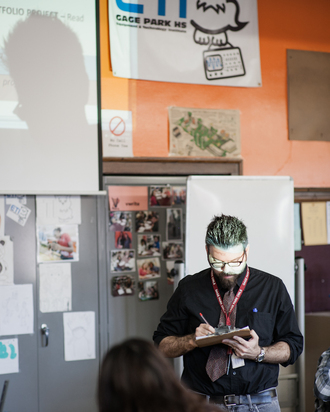 Forty percent of Chicago’s public school students never graduate from high school, much less make it to college. A host of programs have aimed to turn the tide, but very few are able to help schools create a college-going culture.

By becoming part of a school, OneGoal leverages the whole school’s assets toward college preparedness. This offers a new and effective solution in achieving the Fry Foundation’s goal of increasing the achievement of the city’s low-income students through rigorous, academic enrichment programs. Our education grantmaking prioritizes programs working at the high school level.

Originally known as Urban Students Empowered (or US Empowered, for short), OneGoal evaluated its initial after-school program and realized it was not only expensive, but difficult for students and teachers alike to participate. So in 2009, it began an innovative approach: an in-school class piloted at a South Side charter high school.

The model was promising. Twenty-two of the initial 24 participants got accepted to college. Now the organization works with nearly 1,300 students in 23 schools, with plans to expand to Houston and a few other cities. So far, 94 percent of OneGoal students have graduated from high school, and 85 percent are enrolled in college and on track to graduate.

OneGoal reflects our ongoing commitment to education, a cornerstone of our grantmaking since the Foundation’s inception.