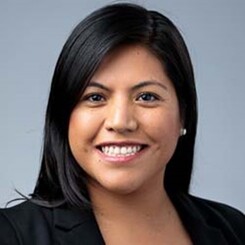 The Lloyd A. Fry Foundation is delighted to announce that Yadira Montoya has joined our team as the new program officer for Health.

Yadira brings diverse experiences in being a change agent in her roles as public health practitioner, researcher, health educator, and community leader in the academic, nonprofit, and aging sectors. As an immigrante Mexicana (Mexican immigrant) raised in the Little Village neighborhood; Yadira has always been interested and invested in advancing health equity and racial justice. Prior to joining the Fry Foundation, Yadira served as a Research Scientist at NORC at the University of Chicago where her research focused on the Latinx aging population and participatory research approaches.

Her various roles in the aging field inspired her to explore the connection between art, health, and sense of community. In 2016, she co-founded La BROCHA, a free arts program aimed at improving the quality of life of Latinx older adults, especially individuals living with Alzheimer’s and Parkinson’s disease. In 2019, Yadira was named a Culture of Health Leader by the Robert Wood Johnson Foundation. She has a Master’s in Public Health from the University of Illinois at Urbana-Champaign. We are thrilled to have Yadira join our team. She will help the Fry Foundation continue to address health inequalities and building healthier and stronger communities for all residents of Chicago.